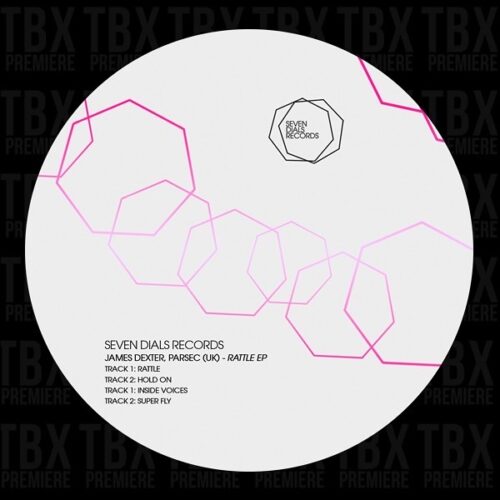 Seb Zito welcomes James Dexter and Parsec to his ever popular Seven Dials Records imprint with a super slick 4 tracker of fresh forward-thinking sounds, as the pair drop their ‘Rattle EP’.

James Dexter is known to many in the scene already having been Beatport’s number 1 selling Minimal Deep Tech artist for a year in 2018. He has released on high profile labels such as Rebellion, Gruuv, Dessous and his own imprint Inermu. He’s been supported by key players such as Pete Tong, Nicole Moudaber, Joris Voorn and John Digweed. Cardiff born and raised Parsec has not stopped climbing the ladder since his grooves started to get noticed, and having released on labels like: TBX, Hedzup, and Rendr Records and you can be sure you’ll keep hearing his name in the future.

The first track on the EP is called ‘Rattle’, and to say that the name speaks for itself is an understatement. Sticking to the funk filled, big beat house vibe, this does not disappoint. Stick it in a warm up set, blow the roof off at 3am or treat the clubbers to something to remember before they go home, it’s not often a gem like this comes around. Next up is a nice, warm appetizer aptly named ‘Hold On’. A tripped-out track with funky beats and deep bass sounds, perfect to start things off with, or close you set to leave a different mark.

Then comes ‘Inside Voices’ and now our dynamic pair have their foot firmly on the gas as they deliver an absolute stomper of track. Funky, big bass, tight beats galore is on display here, this ripper of a track is going to do serious damage.

Finally, closing this fine EP out is a track called ‘Super Fly’. This is a track that brings us back to the vibes of the second track from this EP. With its trippy beats, funky bass and sexy vocal samples it’s the perfect ending to an all in all excellent release from the pair and from Seven Dials.