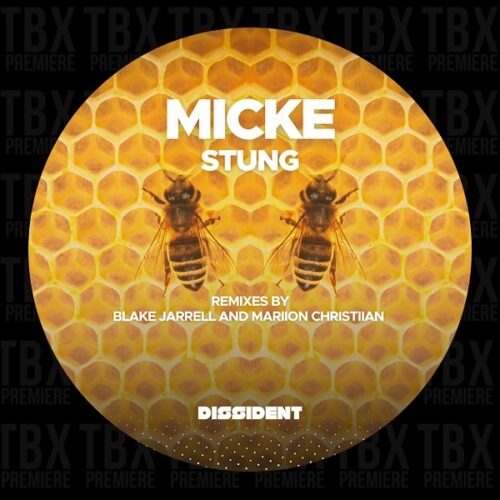 You may recognize Micke for his sterling production of late, both solo and with the legendary Sandra Collins. His history, though, is deeply rooted – running all the way back to turn-of-the-millenium Washington D.C., in iconic venues such as Nation and Club 5, and a tenure as a resident DJ and organizer for one of the most influential club brands in the history of the American dance scene: Buzz. As if these roots weren’t deep enough, his work with Deep Dish’s label and record store, Yoshitoshi kept him immersed in the forefront of new sounds in the aughts, while he began the work of honing his production skills. And did he ever.

Fast forward to today. Micke re-joins Dissident Music for his second label release, “Stung.” This honey-sweet progressive breaks outing was originally pollinated in Micke’s D.C. studio, with its nod to the apiary theme, as an unofficial tribute to the clubbing brand that helped launch his career, Buzzlife, and its founder, another US rave pioneer, Scott Henry.

First up, fans of progressive house music need no introduction to Blake Jarrell. Signed to Armada and on tour with Armin van Buuren for the better part of a decade, Blake’s imprint on the global dance scene is undeniable. After taking some time away from releasing music (to beat cancer, no less), Blake has returned with a vengeance, unleashing a monster of a remix with “Stung (Blake Jarrell Resurrection).” Mastered by grammy-winning engineer Luca Pretolesi, this is proper, future-forward yet classic, sophisticated, massively building progressive house. It will do the business at festivals and in dark rooms alike. Do not fear its 12 minute run-time! It’s a journey and your crowd will thank you.

Mariion Christiian (who ½ of Magnetic Ghost) returns to Dissident ahead of his upcoming EP with a beautiful progressive breaks interpretation. Big melodies and big emotions- MC takes all the best attributes of the original and adds his own twist, and does so to great effect.

Last but not least- Micke returns with a 4 on the floor rendition of “Stung,” renamed “Hive.” Another solid outing, with a depth and character all its own, and definitely not to be missed!

All in all this release is an absolute belter: 4 tracks from three amazing artists who we are very proud to present to you. Thanks for supporting Dissident Music and please stay tuned for more!