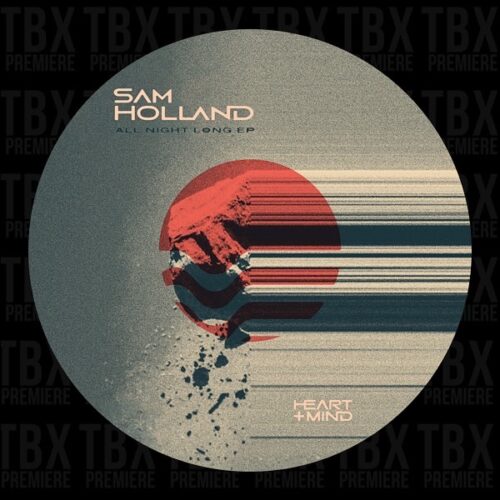 Holland has quickly emerged as a solo house artist to watch over the last two years. His quality productions came on the likes of Richy Ahmed’s FourThirtyTwo, Melé’s Club Bad label and two standout outings on Knee Deep In Sound. He has received BBC Radio One support from Pete Tong and Danny Howard, DJ support from Hot Since 82, Richy Ahmed and Eats Everything and plenty of media interest.
Now stepping out on his own, Heart + Mind will further establish Sam as a vital part of the underground sound of 2022. Both Sam and his label are influenced by 70’s disco and 90’s tribal house music so expect plenty of uplifting disco cuts and rolling percussion in upcoming releases.
Opening up is the fantastic ‘All Night Long,’ a dynamic and elastic disco-house groove with acrobatic bass and filtered synth stabs working their way up through the mix. It makes for a track full of pent-up energy that eventually erupts in colourful, floor-filling fashion. The excellent ‘Hypnotize’ is then a much heavier and more powerful house cut with a late night atmosphere. The synths are textured and tense, the drums hit with real force and the tumbling toms bring a fresh tribal feel. It is a standout tune to make a real impact in big warehouse spaces.