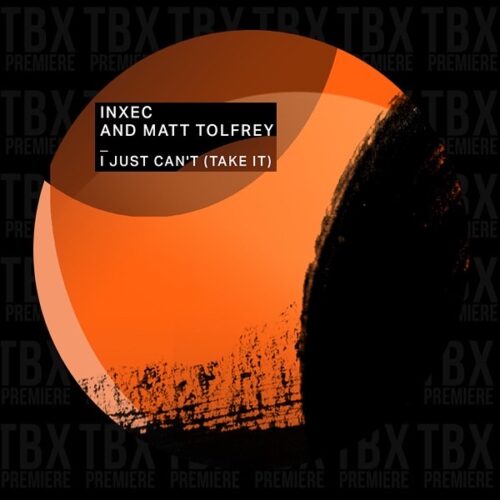 Next up on long running and ever essential UK label Leftroom is a trip down memory lane, revisiting the massive 2010 Ibiza anthem from Matt Tolfrey and Inxec, ‘I Just Can’t (Take It)’. Originally signed to Sven Vath’s Cocoon – the track was a mainstay across Ibiza all summer and was a huge moment in the careers of both artists.

Now 11 years on, the guys never released dub version is shown the light of day, alongside a remix from Rich NxT and two re-works from Tolfrey himself.

The dub cut is deep with glitchy hits. Carefully traded vocals are looped hypnotically over the beats so that you fall under its spell and march on late into the night. Fresh off his standout album, Fuse associate Rich NxT comes through with a low slung and sleazy remix. It’s filled with classy UK techy vibes, a snaking bassline and snatched vocal that adds some soul.

Next comes the Matt Tolfrey EC1 Mix, no doubt named in homage to the part of London where so much good underground music has occurred over the years. It’s a heady one, with meaning kicks and hits as well as a deeply hurried vocal rising through the mix. Pure late night tackle. He then serves up a more bubbling, peak time cut with kinetic kicks and a lucidly synth line paired with a vocal that pops off over and over.