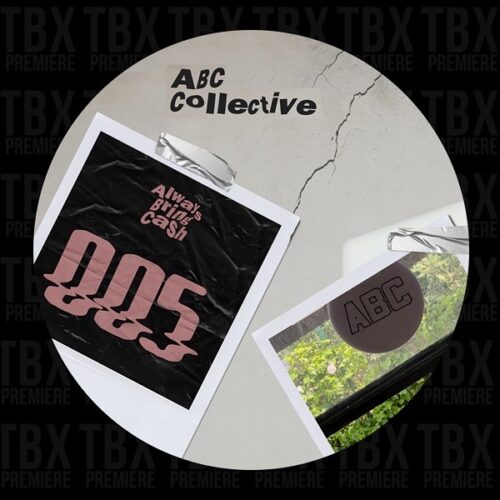 As we begin to reach the peak time of summer the ABC Collective team have kindly prepared a classy and well produced package of tracks, varying in different moods. The Romanian collective are constantly collaborating between themselves, tweaking their productions and expanding on their extensive studio knowledge. The fifth outing for the Always Bring Cash label features Bread&butter, Somesan, Sandru, TmrsTn, Stan, Roxana, Timirash, Herck, and CIA. A true family affair. Check out their recent session at the Sunrise HUB here & here.

Diving head first into the EP is “Scrotch (Bread&butter & Somesan)” has a warm energy, a squelchy bass note hypnotises you before being met with beautiful pads. Next up is “La Curcani (Bread&butter, Sandru, TmrsTrn)” a transcending nine minute journey, meandering through curious textures. “Guilt Trip (Bread&butter, Somesan, Stan & Roxana)” oozes emotion and has some real depth, the heavenly synths converse perfectly with the crisp drum arrangement. On a slightly more moody tip is, “Glock (Bread&butter, Timirash)” it has some abruptness and darker energy around it, enforcing a mysterious vibe from the get go. Shutting things down is “Invo Ire (CIA, Herck, Somesan, Stan)”, a playful and rippling bass trickles continuously, allowing the huge kick, hi-hats, and crunching claps to provide some energy.

Since its inauguration last year the Always Bring Cash digital branch has served some fantastic output, welcomed by the open arms of minimal tastemakers and diggers, and they will undoubtedly continue to do so. The EP will be available on 13th August via the ABC Bandcamp and other online spots. The Bandcamp release will also host an exclusive and animated edit of Kelis & Nas – Blindfold Me, somewhat of a classic amongst the ABC crew, now available to the public.