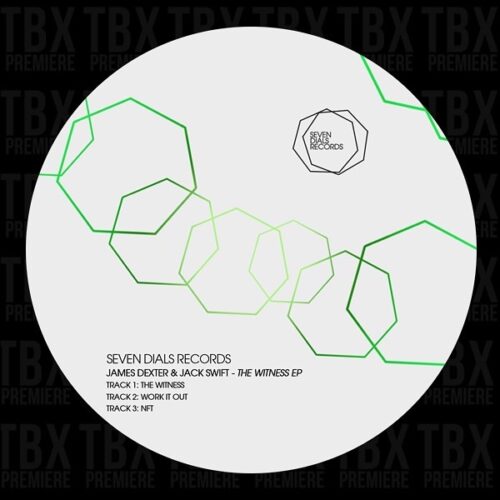 To finish off the year Seb Zito and Seven Dials Records bring in James Dexter and Jack Swift who drop the deep, dark, raw and urban infused, ‘The Witness EP’, an EP perfect for those darker winter nights.

James Dexter is a name that is synonymous with refined deep and underground music. The Inermu label boss has previously featured on profile labels like Moan, Origins records and Hedzup and he also appeared on Seven Dials earlier this year. This summer he graced the hallowed decks of DC10 and Fabric, whilst touring round South America. For this release he collaborates with Jack Swift whose productions have graced labels such as Politics of Dancing, Inermu, Pitch, and many more, and through those releases he’s gained support from some of the scene’s most respected names like Chris Stussy, Toman, Prunk, and Huxley.

The pair kick off the EP with “The Witness’ a track that is everything you’d expect from a Seven Dials release. Driving house beats to get your feet going on the floor, a fierce bassline that hits you in the stomach, all topped off with some soundbwoy vocal cuts to give this track its own identity. If you like rumbling low ends then this is the track for you!

‘Work It Out’ brings a moodier edge to the EP with its break beat flavour and heavy low-end bass. It’s clearly influenced by a bit of Drum and bass with a sweet vocal sample overlaying a lush liquid DnB pad, giving the track a lift. This is a heavy hitter that’s perfect for breaking things up with a raw edge mid set.

To round things off Dexter and Swift drop ‘NFT’ reverting back to a 4/4 beat, however they keep with that moody flavour with another tough low end rumbling bassline, whilst throwing in some ethereal soundscapes and ghostly vocal cuts to really give this a deep and dark edge to the track. This EP is definitely one for the underground heads who like it dark edgy and dangerous. Be ready…..