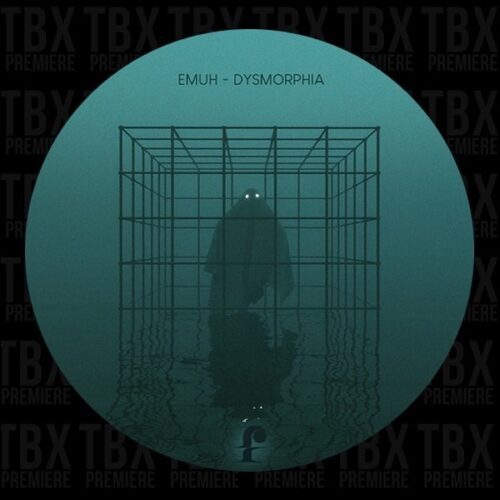 Dysmorphia, the brand new album from the Seattle-based electronic producer, EMUH, is coming soon on Feral One Records, the rapidly ascending record label from another multi-talented producer and Seattle resident, Longstocking.

When Longstocking set out to launch this new label which is now on its third release, she was intent on honoring the spirit of her current locale, branding it as “the Sub Pop of dance music.”

In that regard, Dysmorphia checks all the boxes. Attempting to categorize the now thousands of releases in the Sub Pop catalog is futile at best. A far more efficient approach is that of emotion: Humor. Love. Angst. Rage. Melancholy. Fear. Joy. All packaged into sounds that give the middle finger to pop music in a way only Seattle knows how.

Somehow in one album, seven tracks, and barely over 15 minutes, EMUH accomplishes the same.

Opening with “Design A Water Droplet,” EMUH manifests loneliness (and the daydreams everyone will eventually devise to quell that oft-horrendous feeling) into a cheeky indie-dance tune wherein he uses peppy falsetto croons to invite everyone in his personal day dream to join him at Waterworld—a setting that could also be a depiction of Seattle, by the way.

The water-themed foray into kick-drum driven isolation continues on both sides of “I Just Sold My,” featuring another nascent artist named ZOF. The first half of this story finds the listener stranded in the ocean with nothing but a pair of synthetic mermaids to serenade them via sporadic, coruscating synth riffs.

Then the second half known as the “4AM Mix” is what happens when they’re still floating out there. Those same riffs become fueled with a fire to get back to the docks where the Funktion 1 rig is hot ready. You know when your long-as-hell-day ends at 4AM and you still want to dance? Yeah this is it.

After going through an album built around musically escaping one’s own metaphorical internal struggles it would only be fitting to close it out with a hopeful serenade right? Wrong.

The title track (which is the final track) of the record dives headfirst into dissatisfaction and dissociation. Dance music is discarded as EMUH throws around words like “disgusting” and phrases like “I can’t catch a break” over a sleek, lofi eletronica beat that is equal parts Still Woozy and Gorillaz.

After all, the releases that built the Sub Pop back in the ‘80s and ‘90s weren’t about making anyone feel good. They were about honest emotion. On Dysmorphia EMUH is as honest as he is talented, and that’s what the world needs for now and for always.