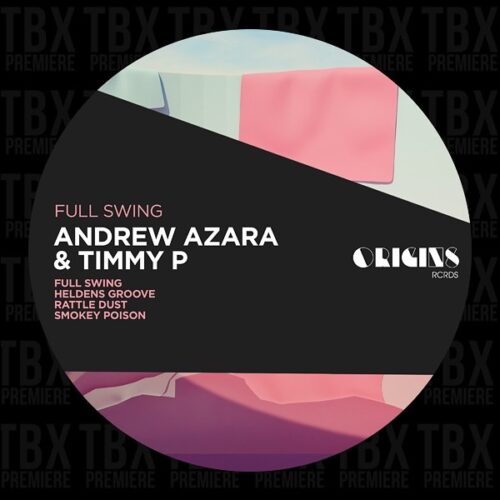 Andrew Azara has had a great set of releases in the last 12 months including releases on Archie Hamilton’s Moscow Records, Sidney Charles’ Heavy House Society, Santé’s AVOTRE and also a remix of Mat.Joe on Origins aswell. Timmy P has featured on labels such as Seb Zito’s Seven Dials, Luuk Van Dijk’s Dark Side of The Sun, and Prunk’s PIV, with an EP released on Origins aswell. The pair have been regularly supported by many in the scene including Jamie Jones, Franky Rizardo, Chris Lake, Kevin McKay, Prok |Fitch and many many more.

For their first release together, the pair serve up a delightful 4 tracker, which starts with the title track of the EP ‘Full Swing’. This is an upbeat and bouncy track with a grooving bassline to get those hips moving and a shaking. It’s topped off with smoothly treated chord stabs to keep the head bopping and this is definitely one to get the floor moving.