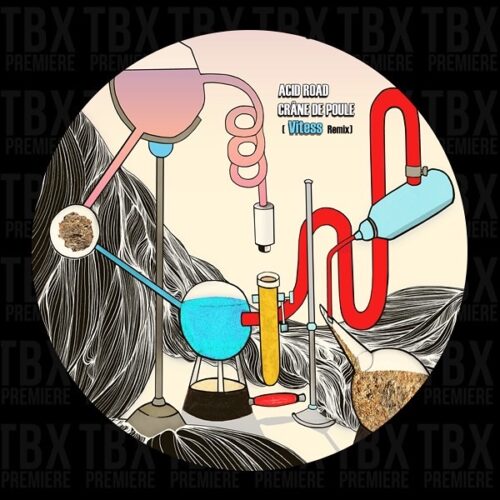 Crâne de Poule real name Louise Engelmann is a young French and Dominican Artist, who shares her stories by using her music and by using the visuals she illustrates. Crâne de Poule is the name of a character she invented as a child and she was drawing it everywhere in her sketchbooks unaware that it would one day be her alter ego. An architect by profession, she studied music at the conservatory when she was younger playing the violin and percussion for a decade and have in recent years ventured into music production and live performances. Those early classical and jazz influences can be found in her music productions as she oscillates between Techno and House, performing live, with her keys, analogue synths and drum machines. Recording over live takes also made sure that each moment she captures is off-the-cuff and in the moment. She created her label CDP REC willing to mix medias: Each release is drawn by hand to invite to a special universe where the lines oscillate with the music.

Acid Road carries its name in reference to a British famous album from 1969.

As a tribute, each track name is related to one of the four unmissable boy’s band first names, and each one is also illustrated by a really acidic adjective.

Every sound of the EP is thought as a special character with his own personality, his own bpm, his own color, his own flavor and his own chemical properties.

The remix from Vitess is a terrific version of Lactic Paul which draws an intense and spicy portrait of Paul. It fits in a perfect way with the very chemical mood of the EP, mixed in this album with more acoustic sounds, like the piano, which we can really recognize as Crâne de Poule’s stamp mark.