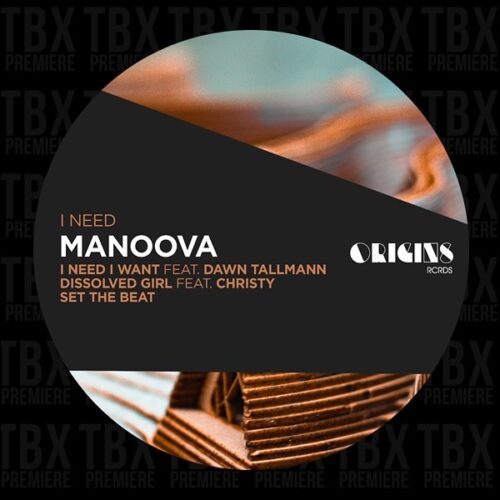 Manoova’s first release on Origins was at the turn of the year and garnered support by BBC One’s Danny Howard, Kiss FM’s Ben Malone and a host of other DJs such as Denney, Piem, Pasqualle Rotella from Insomniac and more, and since then, Manoova also had a release on Okain’s new label Ball Park.
His second release on Origins features two vocal tracks the first being ‘I Need I Want’ which features the legendary vocalist Dawn Tallman who’s collaborated with many well known producers such as Bob Sinclar, Dennis Ferrer, and DJ Spen. I Need I Want, is a elegant bass line driven house track with tripped out ambient chords giving space in the mix for Tallmans’ exquisitely delivered vocals, creating an overall excellent vocal house cut that’s guaranteed to get people moving.

The second track on the EP is Dissolved Girl, a cover of Massive Attacks 1998 track of the same name off their chart topping album Mezzanine. For this cover, Manoova delivers a fresh and airy house groove and brings in Christy for a stunning performance of this classic track. This is truly an outstanding cover version.

The last track is a more minimal deep cut call Set The Beat and is the only instrumental track on the release. This is all about groove and arrangement, with subtle delicate production on the chords and the bassline driving the track, this has a definite summer feel to it.

Josh Butler has again signed amazing music from an up & coming artist and this EP is one that should not be overlooked.