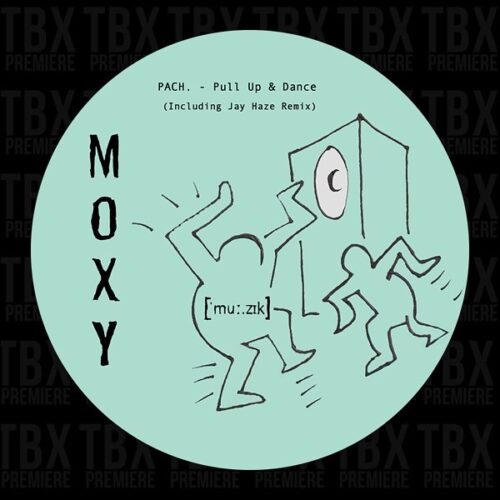 Darius Syrossian enlists a heavyweight crew for the 13th release on his Moxy Muzik label. This release features a pair of originals from fast rising PACH. with the boss himself and Jay Haze on the remix.

Darius Syrossian has a knack for spotting talent before the blow up having previously got behind a whole list of artists giving them their first break. Manchester based PACH. was taken on by Darius as a resident for his Moxy Muzik parties & introduced the hardcore Manchester fanbase to the talents of PACH. who has since gone onto release his slick, stripped back sounds on Seb Zito’s ‘Seven Dials’, & Luuk Van Dijk’s ‘Dark Side Of The Sun’ as well as running his own parties, playing the likes of 93 Feet East and Mint Warehouse, and picking up support from the likes of Enzo Siragusa, East End Dubs and Rich NXT. As such he is a real man of the moment.

Pull Up & Dance is bulky, heavy house music. The bass loops low, and the raw kicks are tough. It’s percolating percussion is fun of subtle funk that will lock in any floor. Add in some sleek melodies and you have a real dancefloor classic. Darius played this to 2000 people & saw Manchester Albert Hall explode in March 2020 a week before the world went into lockdown. It was decided to hold this back until we are back in clubs again, and fittingly this is released in June the same week as it is proposed lockdown is over.

Darius’s Remix is exclusive for the vinyl release only but it ups the ante with clipped vocal stabs, a more tribal groove, and loose limbed percussion. The drum programming on this Darius remix is a nod to the old UK Garage sound.

Underground mainstay, Contexterior boss and Fuck Pony man Jay Haze has long been an inventive producer, often collaborating in the studio with the likes of Ricardo Villalobos and he shows that here. His deft, detailed remix is all minimal beats, heady synth lines and freaky late night vibes that build the pressure and melt your mind.

Last of all, Cats Got Ya Tongue is a high pressure house cut with rubbery drums, warped synths and a twisted afterparty feel.

These are brilliantly expressive tracks as ever from the excellent Moxy Muzik.