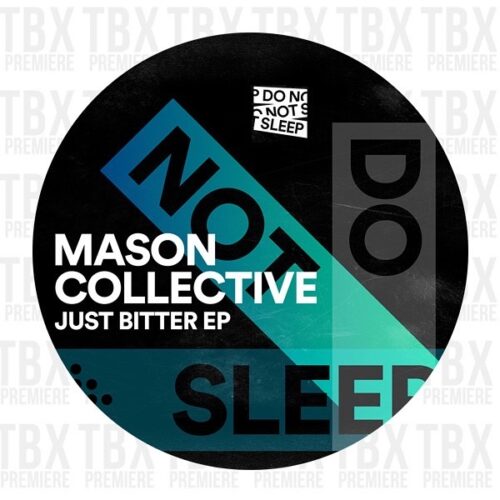 Heavyweight Ibiza based label and brand, Do Not Sleep, continues its rich vein of form, this time returning with a killer release from ever increasingly popular trio, and Whippin label owners, Mason Collective. Having broken through in 2018, playing at some of the UK’s best venues and festivals including Creamfields, Parklife, Warehouse Project, Tobacco Dock and Fabric, they swiftly followed up with their first EP ‘Whippin’ going to number 1 on download stores.

They’ve since capitalized on their break through with European and Ibiza dates including BPM Portugal, Hideout Festival as notable dates. Their MVSON events across the UK have seen their loyal following increase with their renowned underground parties in Manchester.

For their debut release, Just Bitter EP, on Do Not Sleep, the trio have delivered a must have release which is sure to be featured in the sets of global headliners across the world.

First up on the EP is Do With It, with its infectious grooving bassline, skipping hats and well worked vocal cuts, this is an essential cut.
Second up on the release is the curiously named, Post Tektu Tighter, with is funky bouncing bassline giving the track its principal groove and refreshing identity, the open hats give it it’s drive and the incidental sounds deliver the final touches of a track that stands tall amongst giants.

The final and title track of the EP is Just Bitter, with its wobbly feeling bass sound and female vocal spoken words combining with its driving beats completes the package that for sure is going to push trio to greater heights.